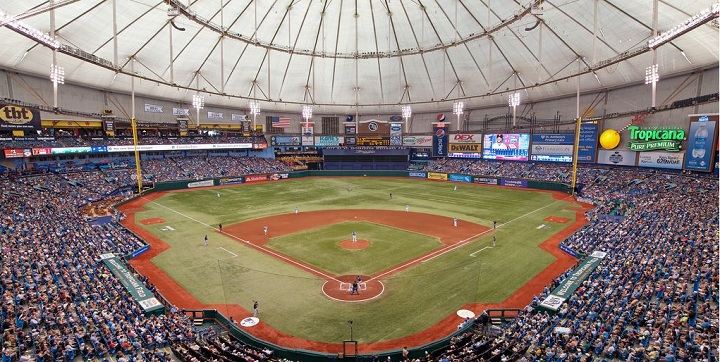 Tropicana Field or more commonly known as The Trop is a domed stadium located in St. Petersburg, Florida. It has been the home of the Tampa Bay Rays of Major League Baseball(MLB) since the team’s inaugural season in 1998. The stadium is also used for college football. Since December 2008 to December 2017, it was also the home of the St. Petersburg Bowl, an annual postseason bowl game. It is currently the only non-retractable domed stadium in Major League Baseball, making it the only all-year-round indoor venue in MLB.

Additionally, Tropicana Field is the smallest MLB stadium by seating capacity when obstructed-view rows in the uppermost sections are covered with tarpaulin sheets as they are for most Rays games. When Tropicana Field opened in 1990, it was originally known as the Florida Suncoast Dome. In 1993, the Tampa Bay Lightning moved to the facility and its name was changed to the ThunderDome. The name stayed until the team moved to their new home in downtown Tampa in 1996. A few months later, in October 1996, Tropicana Products signed a 30-year naming rights deal.

St. Petersburg decided it wanted a share of the professional sports scene in Tampa Bay after they won a few sports contracts in the ‘70s. Even prior to that, the city has long decided that they would attempt to attract MLB. Possible designs for a baseball park or multi-purpose stadium were proposed as early as 1983. One of the designs, called for an open-air stadium with a circus tent-like covering.

Ultimately, it was decided that a stadium with a fixed permanent dome was necessary for a prospective major league team to be viable in the area. One of the main reasons for the decisions is due to its hot, humid summers and frequent thunderstorms. The ballpark construction began in 1986 in hope to lure an MLB team to the facility.

The stadium, built originally as the Florida Suncoast Dome, was first used in an attempt to attract the Chicago White Sox to relocate to St. Petersburg. However, it was only possible if a new ballpark was not built to replace the aging Comiskey Park. The governments of Chicago and Illinois eventually agreed to build a new Comiskey Park in 1989.

A US$70 million renovation then took place in 1995. The plan was made to upgrade the stadium that had cost $130 million to complete. Ebbets Field was the model for the renovation. The first regular season baseball game took place at the park on March 31, 1998. The Devil Rays faced the Detroit Tigers and lost 11–6.

In 2000, the stadium’s original AstroTurf surface was replaced to FieldTurf. Later in 2007, it was again replaced with the newer version, FieldTurf Duo. The stadium was the first in MLB with an artificial turf field with a full dirt infield since Busch Stadium II in 1976. Six years later, Tropicana Field underwent a $25 million facelift prior to the 2006 season.

The most recognizable exterior feature of Tropicana Field is the slanted roof that was designed at an angle to reduce the interior volume in order to reduce cooling costs and to better protect the stadium from hurricanes. The dome is supported by a tensegrity structure and is lit up with orange lights after the Rays win a home game. Tropicana Field became the only active Major League Baseball stadium with a fixed roof in 2010. The catwalks attached to the non-retractable roof have been rare but occasional obstructions in the way of batted balls thus, receiving some criticisms.

The main rotunda, on the east end of Tropicana Field, resembles the Ebbets Field rotunda on the interior. Another feature of the stadium is the walkway to the main entrance of the park, which features a 900 ft (270 m) long ceramic tile mosaic that is made of 1,849,091 one-inch-square tiles. It is the largest outdoor tile mosaic in Florida and the fifth-largest in the United States.

For more information on the Tropicana Field, please see the specific pages below.

Seating Information:
For information on accessible seating and to view the Tropicana Field seating chart page.

Sign up for our newsletter and get $5 off your first order!
You will also recieve a monthly “What’s On Guide” to your email!